This page is archived and is no longer being updated.

The current orchestra page is here.

Call for New and Returning Members.

It's time once again to assess interest in the NVFO for our 2010 summer concerts. The NVFO is an all-volunteer organization now in its third season of working exclusively with instruments of the New Violin Family and performing benefit concerts for worthy organizations in Central New York.

Orchestra members have expressed the desire to continue improving, and we are looking for players who can help us get to the next level. Last year we seated 3 sopranos, 3 mezzos, 3 altos, 2 tenors, 2 baritones, 1 bass, and 1 contrabass. This year we hope to have instruments available for sections of 4 sopranos, 4 mezzos, 3 or 4 altos, 3 or 4 tenors, 3 baritones, 2 basses, and 1 contrabass.

Open Seats and Requirements for Participation.

At present, are needs are represented by the word "open" in the orchestra roster on the right side of this page. These positions and instruments are available on a first-come, first-served basis. Acceptance is based on recommendation of orchestra members in good standing or by invitation. There is no charge for the use of the instrument for the summer. The only requirements are that you take good care of the instrument, learn your music, and attend the rehearsals.

We will also ask you to sign a release for the use of your likeness or performance in the audio and video recordings we make each summer. This release is for non-commercial use only, such as advertising and promotion of the New Violin Family Orchestra (like the video clip on our home page).

A Special Note for Bass Players.

The two chamber basses to be used this summer have very short string lengths and are tuned in fifths (two octaves below the violin and a fourth below the cello). Players who have cello experience or who are already comfortable with fifths-tuning will have an great advantage. This is a very fun instrument to play, once you get it! 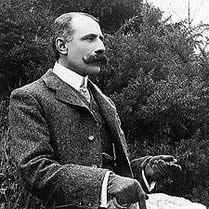 The Serenade for String Orchestra, opus 20, is one of Edward Elgar's (1857 - 1934) earliest works. Written in March 1892, it was presented privately by the Worcester Ladies' Orchestral Class with Elgar on the podium. The piece's public premiere occured in Antwerp, Belgium on July 21, 1896. The Serenade is dedicated to W. H. Whinfield, but other accounts claim it was originally written as a gift to Elgar's wife, Caroline Alice Roberts, on their third wedding anniversary. As such, this serenade would be a love song, and when listening to the wonderful harmonies and noting the close attention Elgar paid to nuance and dynamics, it would be hard to think otherwise.

The Serenade was the first of Elgar's youthful compositions to find a place in the standard repertoire, and even today it is still his most often-performed work. It is difficult to believe Elgar was a self-taught composer because the Serenade abounds in masterful string writing, especially in the soaring second movement. Throughout his life, Elgar professed a great satisfaction with this composition, saying that he liked it as much as anything he'd ever written. His final recording for the Gramophone Company, made in 1933 when he was dying of inoperable cancer, was of the Serenade for String Orchestra. 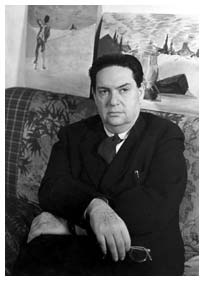 The Chamber Symphony No. 4, opus 47, by Darius Milhaud, (1892 - 1974) is one of a neglected series of small symphonic gems written by this prolific French composer. It was completed in Paris in 1921 and might never have been performed by the ensemble for which it was originally written, the Dixtuor á Cordes (a String Dectet - also called the "double quintet") of Léo and Léon Sir. The Sirs, son and father, had developed a set of ten stringed instruments in graduated sizes that were precursors of the New Violin Family's octet. Although forgotten now, the double quintet attained a fair degree of acceptance in Europe that it took two world wars to kill. Symphony No. 4 is written in a manner that allows it to be attempted by conventional string orchestras, but Milhaud notes in the score that it is intended for the Dixtuor.

This symphonette is a work in which Milhaud's lyrical, yet polytonal, style is well-represented, and in our arrangement we use the original extended range of the Dixtuor called for by the composer. Milhaud's six Chamber Symphonies, written between 1917 and 1922, all have three short movements: in number four, no movement is longer than three minutes. This has caused the set to be referred to as "anti-symphonies." Milhaud's skill in string writing is shown here, including a ten-part fugue that constitutes the entire third movement. We are pleased to present this work in nearly its original form. 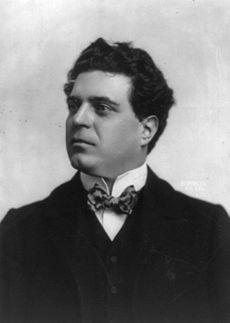 The Symphonic Intermezzo from the one-act opera Cavalleria Rusticana (Rustic Chivalry) by Pietro Mascagni (1863 - 1945) ranks as one of the most beautiful instrumental pieces from the operatic repertoire. Cavalleria Rusticana was only Mascagni's second opera, and it remains the best-known of the sixteen others he wrote. Its premiere in May of 1890 caused a sensation, with the wildly applauding audience recalling the 26-year-old Mascagni to the stage 40 times. He wore a borrowed coat, for at the time he was living in a garret and was desperately poor. Cavalleria Rusticana was solely responsible for the rise of an entirely new dramatic form, the Verismo movement (realism) in Italian opera, and it launched Mascagni's illustrious career.

Opera composers of this period often wrote instrumental intermezzi as connecting pieces between acts or scenes of an opera, and this particular one is generally considered the most famous of its type. Mascagni uses the strings like a gigantic opera chorus that captures the quintessential sound of the Italian opera. At its performance in New York in 1891, the Intermezzo so moved the audience that it had to be encored twice. 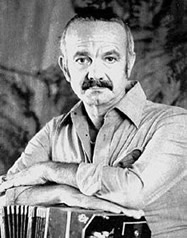 Astor Piazzolla (1921 - 1992), a composer of Argentinian descent, elevated the tango into a new form that incorporated elements of jazz with classical elements such as dissonance and counterpoint. His teachers included Alberto Ginastera and the legendary French pedagog, Nadia Boulanger, who advised Piazzolla to put more of himself into his music and not to try sounding like Stravinsky or Ravel. *

The Fuga y Misterio is an intriguing combination of intense fugal writing over the rhythmic frame of a tango, followed by a lyrical "mystery" theme. The music comes from fifth scene of Piazzolla's 1968 chamber opera, María de Buenos Aires, which finds the heroine wandering alone at night through the heart of that Argentine city. The piece has become popular in recent years as a concert-closer, usually with a coda added by the arranger. Over a hundred different versions of this piece for almost any ensemble imaginable can be found on YouTube alone. This is something the composer might have enjoyed, for in his score, he calls upon some of the players to improvise over the harmonic structure, as we will do tonight.

*Of his first meeting with Nadia Boulanger in 1954, Piazzolla recalls:

"When I met her, I showed her my kilos of symponies and sonatas. She started to read them and suddenly came out with a horrible sentence: "It's very well written." And stoppped with a big period, round like a soccer ball. After a long while she said: "Here you are like Stravinsky, like Bartok, like Ravel, but you know what happens? I can't find Piazzolla in this." And she began to investigate my private life: what I did, what I did and did not play, if I was single, married, or living with someone-- she was like an FBI agent! And I was very ashamed to tell her that I was a tango musician. Finally I said, "I play in a night club." I didn't want to say cabaret. And she answered, "Night club, mais oui, but that is a cabaret, isn't it?" "Yes," I answered, and thought, "I'll hit this woman in the head with a radio . . . " It wasn't easy to lie to her.

She kept asking; "You say that you are not a pianist. What instrument do you play, then?" And I didn't want to tell her I was a bandoneon player because, I thought, "Then she will throw me from the fourth floor." Finally, I confessed, and she asked me to play some bars of a tango of my own. She suddenly opened her eyes, took my hand, and told me: "You idot, that's Piazzolla!" And I took all the music I had composed, ten years of my life, and sent it to hell in two seconds.

Please Note. The ASTA Concert on July 29 will be held in the Hockett Family Recital Hall, not Ford Hall as originally scheduled. 8:00 p.m., Whelan Center for Music, Ithaca College. Orchestra call is 7:15 p.m.

The rehearsal and recording session on August 2 will be at 8:00 p.m., Ford Hall, Whelan Center for Music, Ithaca College, not St. Luke as originally scheduled. Orchestra call is 7:30.

Scroll down for links to maps for directions to Fayetteville. Please note Fayetteville call is 7:00 p.m.!

We live in an imperfect world, so check back frequently. :-|

We're pleased to announce that Maestro Erik Kibelsbeck has agreed to return as conductor for the 2010 summer concerts.

Since 2004, Erik has served as music director at Ithaca’s St. Luke Lutheran Church where he also plays the organ and coordinates the Vespers at St. Luke series. He is beginning his ninth season as music director of the Onondaga Civic Symphony, leading three classics and one pops concert each year and conducting an ever-increasing range of the standard symphonic repertoire. He conducted the Ithaca College Trombone Troupe for over seven years, and has taught various courses at Ithaca College, where he is the coordinator of music facilities and publicity. Erik holds a master's degree in orchestral conducting from Ithaca College and a bachelor's degree in bassoon and music education from the Eastman School of Music.

In previous summers, our concert programming has been arranged from the standard string orchestra repertoire, which causes us to use our soprano violins much the same way as the first violins are used in a conventional group. This year, we send our highest voices skyward in several selections, highlighting some capabilities in both the players and instruments that have not been revealed before. Must be heard to be believed!

" . . . absolutely wonderful --the instruments, your explanatory words, the repertoire and the performances."

" . . . a shimmering and blended ideal of these strings!"

"Saturday evening was especially wondrous for me to at last hear evidence of this amazing sound ideal."

"The sound was unlike anything I'd ever heard before. About halfway through the Bachianas, I felt all my shakras open!"

"The concert was enjoyable, informative, and interesting. Unlike most other concerts I've attended, it was also satisfying."

"Thank you so much for a wonderful concert!"

" . . . the sound is incredibly full and beautiful.  Please convey my sincere thanks to the ensemble, conductor and all who generously donated their time and fine musicianship."

"Performancewise, perhaps a few chuffs and fluffs as per usual, more than made up for by the energy and that incredible SOUND. WOW ! Crank it up !"

"I've been watching you develop and refine these instruments for the last seven years, but even I didn't understand what you were talking about until I heard the orchestra in person. The sound was amazing . . ."

"The program listed 15 players, but I found myself constantly counting the number on stage because it sounded like there were 30 of you up there."

"The day after the concert I was jogging while listening to [a standard orchestra playing] Mozart on my iPod. The strings sounded like they were scattered out in space, and I finally understood what you meant. I *really* missed the tenors. When it comes to listening to [conventional] string playing, you've ruined me."

"I've never heard so much sound from so few strings. It was massive and organ-like. Remarkable."

"This is the first orchestra I've heard where all the instruments are equal. No one covers up anyone else."

"They really do have a different sound, these instruments.  A nice blended vibrational pattern- it's fascinating."